Exercise may benefit brain health and improve cognitive performance during aging. It’s also associated with reduced Alzheimer’s disease risk and cognitive decline. But the mechanisms responsible aren’t well understood. Factors secreted into the bloodstream may play a role. If so, these factors would be promising leads for developing treatments for cognitive disorders. 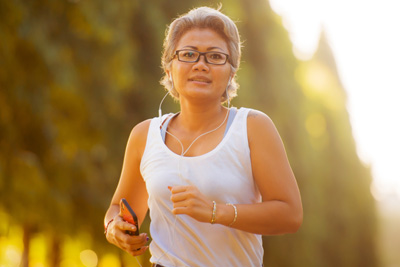 Past studies found that exercise induces production of FNDC5, a protein found on the surfaces of certain cells. FNDC5 can activate neuroprotective genes in the hippocampus, the brain region in charge of memory formation. The outer part of FNDC5 can be cleaved off to form a hormone called irisin, which is released into the bloodstream. A team of researchers, led by Dr. Christiane Wrann at Massachusetts General Hospital and Harvard Medical School, investigated whether irisin is responsible for mediating the cognitive benefits of exercise.

The study was supported in part by several NIH institutes (see below). Results appeared in Nature Metabolism on August 20, 2021.

First, the researchers deleted the gene encoding FNDC5 in mice, thereby removing irisin. They then compared the effects of exercise on cognitive performance in these “knockout” mice and in control mice. Some mice had an exercise wheel to run on, while others did not.

Next, the researchers delivered irisin directly into the mice’s brains. Doing so improved cognitive performance in both knockout and control mice.

The team examined the neurons in the knockout mice in a part of the hippocampus. They found that newly born neurons in this area had abnormal activation patterns, structure, and gene activity.

The researchers then tested the therapeutic potential of irisin in mouse models of Alzheimer’s disease. They delivered the gene for irisin into the mice, which led to irisin production in the liver. The blood of these mice, in turn, contained elevated irisin levels. Two months after treatment, the researchers tested the mice’s cognitive performance. The irisin-treated mice performed better on the tests than untreated mice. Treated mice also showed signs of reduced neuroinflammation—a process related to neurodegenerative diseases—in the hippocampus. In addition, the researchers found that irisin could cross the blood-brain barrier to act on the brain.

These results suggest that exercise may improve cognitive performance by increasing irisin levels. “This is particularly important inasmuch as irisin, a small natural peptide, would be much easier to develop into a therapeutic than the much larger membrane-bound protein FNDC5,” Wrann says.

Irisin is identical in mice and people. Its blood levels in people have also been shown to rise with endurance exercise. It could thus potentially help to treat a variety of cognitive disorders. Wrann adds, “Since irisin does not specifically target amyloid plaques, but rather neuroinflammation directly, we’re optimistic it could have beneficial effects on neurodegenerative diseases beyond just Alzheimer’s.”